A few too many days off the water led to a hastily planned trip to the Golfe du Morbihan
Usually my trips to the golfe coincide with the spring tides to take full advantage of the currents, however with a coefficient of just 35 it really was the lowest neap that I have ever paddled on. The outline plan was to take a trip up the River Auray and on to the upper reaches of the River Bono 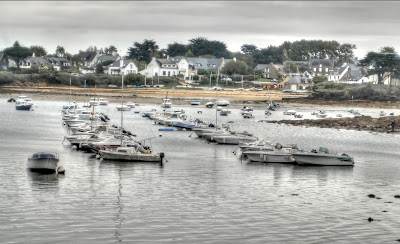 We parked in the large car park at Port Navalo, the bays were clearly marked “PAYANT”… it wasn’t that long ago that all parking was free, but we quickly discovered that paid parking is restricted to the summer months.

Port Navalo is at the entrance to the Golfe, and even on neaps the current is fast, we planned to cross at slack moving up the river with the tide. It was still busy at the end of the summer with motor cruisers, yachts and fast touring ferries all jostling for space.

Soon we left the bustle and found a rather beautiful and tranquil river, the banks gave way to salt marshes hosting Egrets and Spoonbills.

Turning right into the River Bono led us up to the small drying harbour of Port du Bono, with an hour or so to spare before the tide turned we want up the hill for a beer. 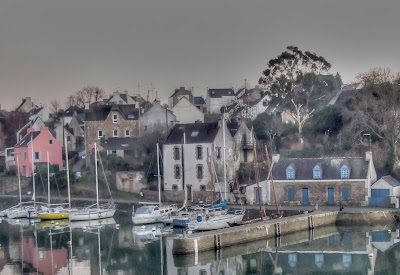 Our return was fast, it also meant we would need to cross the main stream as it left the Golfe. We took a route on the inside of ‘Petite vezid’ and crossed over to the Petite Mouton, even on this neap tide there were some good bouncy waves in the main channel demanding a degree of accuracy to make the eddy after Petite mouton, before a more leisurely paddle back into Port Navalo